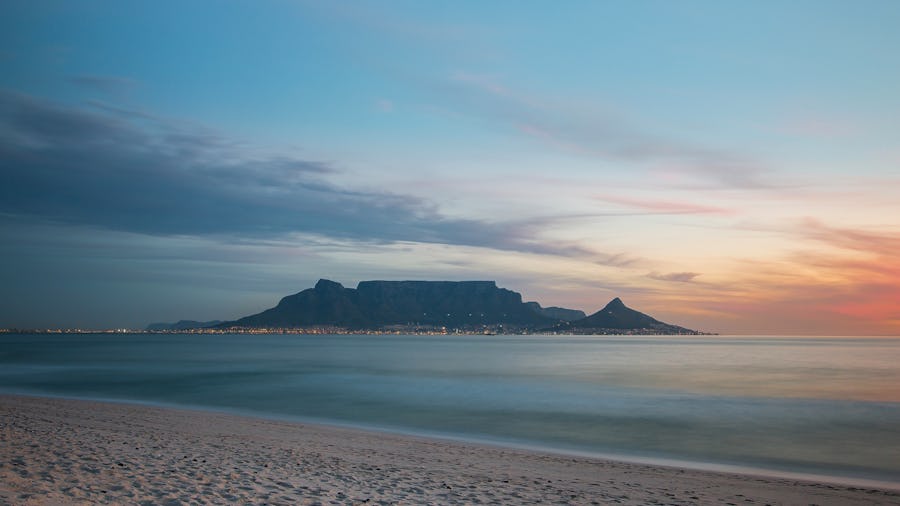 Cape Town sunsets are the stuff of legends. It’s as if the sun decides to put on a proper show just before retiring for the day, turning the sky into vivid hues of orange and pink, often overlaid with a misty veil for dramatic effect. This natural spectacle is not to be missed – and it deserves to be observed from a prime vantage point. Luckily, the Mother City is not short on jaw-dropping backdrops – so, without further ado here are some of our favourite sunset spots in Cape Town.

Watch the sunset on a mountain…

The Mother City’s iconic natural landmarks, Table Mountain and, just opposite, the smaller Lion’s Head, offer what must be the most spectacular sunset spots in Cape Town. Lion’s Head is one of the city’s most popular hiking routes with stellar views of the Atlantic Seaboard and the CBD from the top – pack a bottle of bubbly and watch the sun sink into the ocean on one side, then turn around to marvel at the rising moon on the other. It’s a sight to behold on any given day but especially when there’s a full moon. A word of warning: the Full Moon hike gets exceptionally busy. Pack a headlight, watch your steps and take your time on the descent, you won’t be going anywhere fast! Signal Hill at the foot of Lion’s Head is another scenic sunset option and an ideal spot from which to toast the end of a beautiful day with a picnic and a chilled glass of wine. Bliss. For a lofty but leisurely sunset expedition ascend Table Mountain in a cable car to snap a million sunset photos from various angles at the top. Last but not least, there’s Kloof Corner, an easy hike on Table Mountain that only takes about 30 (fairly steep but totally achievable) minutes – you’ll be rewarded with panoramic sunset views from up high!

There’s an endless choice of beach sunset options in the Mother City from the renowned Camps Bay and Clifton beaches to lesser-known gems. It’s worth leaving the Camps Bay crowds behind to go in search of two of our favourite hidden treasures: Robyn’s Beach, a tiny alcove halfway between Camps Bay and Bakoven (there’s no parking whatsoever, so walk from Camps Bay); and Beta Beach in Bakoven itself. Both are real hush-hush spots that locals like to keep to themselves – but we thought we’d let you in on the secret! Llandudno is another great spot to watch the sunset while the kids splash in the water (there are no bars or restaurants nearby, so come prepared). If you happen to find yourself cruising along Chapman’s Peak Drive at sunset it’s worth stopping off at Noordhoek Beach – the 8km long stretch of powdery white sand, flanked by majestic slopes covered in coastal fynbos, seems to expand into a never-ending horizon. It’s vast and wild – perfect for a sunset walk (but avoid walking too far and then having to return in the dark, for safety reasons). On the other side of town, Sunset Beach, a less crowded alternative to Bloubergstrand yet undoubtedly one of the best sunset spots in Cape Town, will mesmerise you with the most spectacular views of Table Mountain and Robben Island.

P.S: We should mention at this point that alcohol is not allowed on any of Cape Town’s beaches – bring soft drinks, then head to a bar after for the stronger stuff.

Cape Town
Design your own trip
Choose a destination, pick your lodges and we’ll do the rest
Design a trip

Talking of bars…we love a good tipple here at Timbuktu – lucky then that Cape Town comes up trumps in that department! We could waffle on forever about all the different options but for sunset purposes we would like to suggest a newcomer and a stalwart that both hit the spot. The new kid on the block is Baptiste Bar at the recently reopened The Marly Hotel in Camps Bay. The Marly cleverly expanded by adding a whole new floor of guest rooms – and then topping it off with yet another level, featuring a rooftop pool, lounge and bar. The result is a jaw-dropping 360-degree view of Camps Bay which, mixed with some delicious cocktails, makes the perfect sunset combination. Further out of Camps Bay towards Llandudno, you’ll happen upon the tried and tested Leopard Bar at The Twelve Apostles Hotel, a super plush sunset affair. Sit on the balcony, sip on a glass of bubbly and nibble on the complimentary snacks while you gaze at the dusky horizon.

Who says you have to be on dry land to enjoy the sunset? The Atlantic must surely be one of the most thrilling sunset spots in Cape Town, so jump on one of many sunset boats departing the V&A Waterfront to cruise along the Atlantic Seaboard. Most of them are highly affordable and will also throw in a glass or two of wine and snacks, making it a covetable sunset option that allows you to view the city from a different angle at dusk.