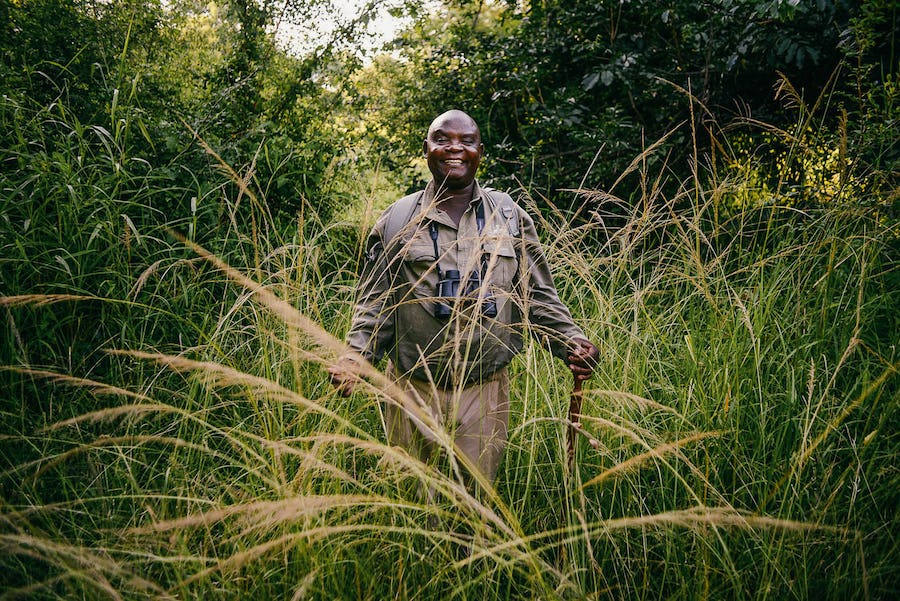 There are many ways to travel, but only walking gives you the opportunity to move at the pace of nature.

How much more true this is of walking safaris, where chatting disrupts the spirit of the trail and confuses the senses of guides and fellow trailists.

A walking safari demands you throw out all the clutter of urban life and tune into the bush, to its sounds and smells, the textures, temperature and colours: it is how animals survive, much like our ancestors did before we invented air conditioning and cars.

A walking safari in Zambia’s North Luangwa – there is no other means of travel here – forces you ask that quintessential question: how much, or how little, is enough?

There are no lodges, only temporary camps that each year have to be dismantled before the onset of the rainy season. If South Luangwa is antiquated, by comparison North Luangwa is positively primordial. And so back the central question: big game during the day, bed at night surrounded by a reed-and-thatch hut, delicious bush-cooked meals, a bucket shower followed by wine or whisky. If you need more, this is not your natural habitat.

The Kruger is well known as the most managed game park in Africa, but that does not mean it’s tame. Only a tiny fraction of Kruger is accessible by vehicle.

There are several guided walks, but lording over them is the Nyalaland Trail in the far north, which is a region of baobab trees and large elephant and buffalo herds. Accommodation is at a base camp with two-bunk A-frame huts. You walk out each day with two guides and return to the base camp where dinner is prepared in a Spartan camp kitchen. Trailists are expected to provide their own refreshments.

The Okavango in Botswana has been described as a “sea of land, land of water” with Chiefs being the largest island in the world’s largest inland delta.

“Walking” describes only partly of the experience where you will be poled along sinuous waterways and backwaters in dug-out “mokoro” canoes, stop, walk, pole, walk. Nights in a semi-luxury game lodge bookend the trail with mobile trail camps set up as you go. Game is more than plentiful and arguably the best year-round game destination in Africa. The Delta is also one of its top birding destinations – in short it is a Paleolithic paradise.

Ruaha in southern Tanzania is “a big place where big things happen”. As such, it attracts some of Africa’s best guides.

Only recently Ruaha has become known as the place where lions routinely take down elephants as prey (although you’d rather not witness). One of the least known of Africa’s big game parks, Ruaha retains a sense of the road less travelled and the difference which it makes. In fact, most of the park has no roads so it is the trail less taken. The landscape and vegetation are diverse and through it all runs the Great Ruaha River.

Feeling inspired? Have a look at Kwihala Camp for walking experiences in Ruaha.

South Luangwa in Zambia is what many other popular safari destinations “used to be like”: small, intimate camps and one of the densest assemblages of big and small game in Africa.

It also has one of the largest leopard populations on the continent. Walking trails in South Luangwa manage to combine the luxury and style we associate with the Victorian explorers with a deep understanding of wild Africa, the wild animals as well as the local communities on which their safaris are dependent. Trails camps are basic but you can also walk between more luxurious lodges to wash the dust from body and mouth.

Umfolozi Game Reserve, in South Africa, is famously known as the place where the southern white rhino was saved from extinction. It remains the best place to see both white and black species.

There are two trail options: one where you stay in and walk out each day from a base camp, and the other where you walk between satellite camps; but fear not, donkeys carry the heavy stuff. The chances of not seeing rhinos here are slim, making it just about the only place left in Africa where that claim can be made. The spectre of Zulu history pervades the place.

Feeling inspired? Find out more about the Umfolozi trail.

The Selous is the largest game reserve in Africa and indeed the world. The reserve is named after the famous hunter and military scout who was killed here by a German sniper’s bullet during WW I.

Kenyan conservationist Richard Bonham made walking safaris here the gold standard, exploring the place in the 1980s with the most intrepid of clients. Walking in the Selous has always been about a state of mind and not body or the distance covered; it is an opportunity to exercise the senses, to unload the burden of modern contraptions and the yoke of occupational stress.

Feeling inspired? Create and customise one of our suggested walking safaris in Zambia.

A Cape Town resident, David Bristow has written some 20 books on travel and the environment. Of special note is the self-published Africa’s Finest– the result of four years of research and writing and showcasing the most sustainable and responsible safari lodges in Africa and the Indian Ocean Islands. David has climbed most of the high peaks in Africa and several others around the world.

Selous
Learn more
Not sure where to go?
Answer a few simple questions to get instant trip recommendations
Start the wizard