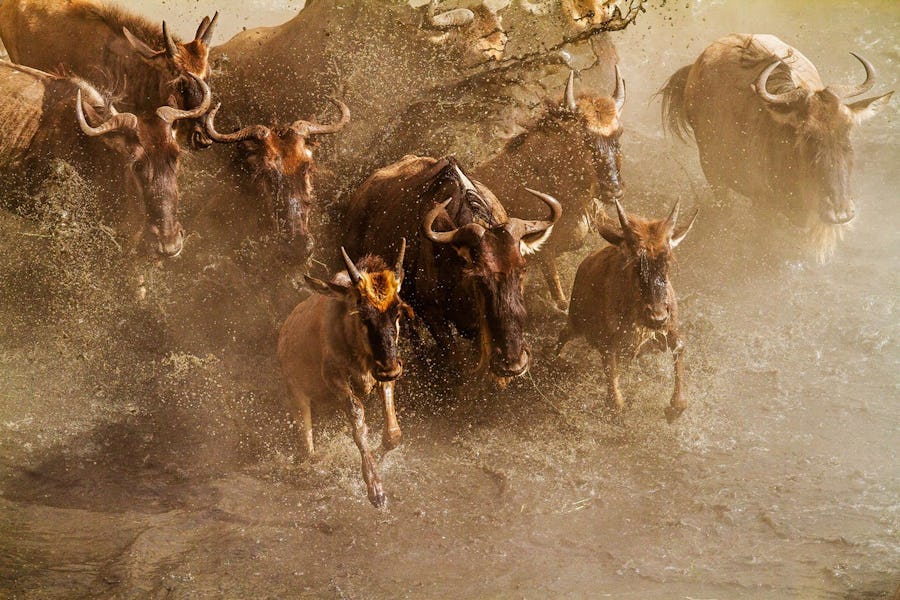 For anyone who’s ever flicked through a safari guide, the Masai Mara needs little introduction. Although markedly smaller than many of East Africa’s safari gems (it’s 1500 km2 in size), boy does it pack a lot in. The original home of the Maasai people, Mara means ‘spotted land’, so named for its boundless plains lightly sprinkled with acacias and kopjes. This scene has become the face of African safaris and set the Masai Mara firmly at the top of Kenya’s ultimate safari spots. It also happens to be home to some of the highest densities of wildlife in Africa, which provide some of nature’s most breathtaking spectacles. Majestic, strolling herds of elephant, the clash of Africa’s biggest cats and the heart-pumping thrill of the Great Migration…It all awaits on a Masai Mara safari.

To get you started…

On a Masai Mara safari, game drives are a definite staple and allow you to cover the most ground, keeping pace with the thundering herds of wildebeest and watching all the big cat action. You can also take full advantage of a full-day drive so you never miss a moment. Bush walks are possible in some of the private conservancies, and you’ll trace the movements of a beetle, uncover hidden burrows and learn to track wildlife on foot with a Maasai guide. You could even join the throngs on horseback and get closer to the wildlife than you thought possible or gaze over the sprawling plains and ant-sized antelope from a hot air balloon.

While the Masai Mara’s bucket list-defining reputation precedes it, so does the price tag. A Masai Mara safari may be expensive but it has a good excuse – everything from game drives to walking safaris to bush dinners tend to be included in the price. Not to mention your dollars are fed into community and conservation projects that work to preserve this beautiful place.

Over the years, we’ve picked up a tip or two for saving some pennies in the Masai Mara – and all without compromising on the experience. Staying in a conservancy for part of your trip can often be more affordable than the central areas of the reserve and it’s often quieter and more exclusive. While it may be tempting and time-saving to fly from place to place, Kenya’s layout makes it possible to drive between most safari destinations, which also means you’ll benefit from having a private guide for the duration of your trip. Lastly, any safari outside of peak season means a drop in the cost – but more on that later.

The Great Migration is undoubtedly the greatest wildlife show on earth and for a portion of the year (August to October), it plays out in the Masai Mara. In July, the tumultuous herds of wildebeest, zebra, gazelle and topi gather their energy on the banks of the Mara River before they crash across over the coming weeks, hoping to dodge the waiting crocodile and big cats. They remain on the plains of the Mara until October, enjoying all the succulent grasses and fresh water they can – a sight you’ll enjoy with nary a tree to block your view.

The Great Migration aside, the wildlife of the Masai Mara is a highlight all on its own. Four out of the Big Five can be spotted all year round, it’s just the rhino that remains elusive. The landscape also provides a unique chance to see cheetah sprinting across the plains in pursuit of antelope, while the rivers hold giant crocodile and pods of hippo, which you’ll see basking in the sun or foraging (on night drives).

Kenya has an incredible range of birdlife with over 1000 species to be spotted, including the finely-feathered migratory birds. Birding is at its colourful peak between November and March, and twitchers will be amazed by the variety, from the tiniest bee-eater to eagles that soar overhead.

This is the land of the Maasai and a visit to the Mara gives a true insight into their traditional way of life. In the conservancies, you are able to travel to a Maasai village, taste local beer and other delicacies, before joining the day’s activities and learning how to track wildlife from the masters on a walking safari.

The Masai Mara in three parts

The Masai Mara can be split into three distinctive areas, each of which differ in ownership, activities offered and the number of visitors.


This is the Masai Mara as most people know it. The largest piece of the pie, it is government-run and has more rules to follow. For example, there is no off-roading or walking safaris allowed and, to avoid interfering with anti-poaching patrols, no night drives. There is a long list of camps and lodges built inside the reserve, which means the crowds can be overwhelming in peak season. Of course, the reserve is famous for a reason and it provides fabulous wildlife-spotting all year round – the Big Five, Africa’s big cats, and vast herds of antelope are all in residence. It also happens to be prime river crossing territory when the Great Migration thunders across the Mara and onto the plains.

One of the best camps in the reserve, Rekero is well-established – and what a location. You’ll be one of the first to see the Great Migration herds from your deck! Elewana Sand River provides lavish tents and vintage style at a riverside spot, where you’ll see droves of wildlife on game drives with some of the finest guides around.

Past the borders of the main reserve, there is a collection of amazing conservancies, which are leased to the camps by Maasai landowners. We are pleased to report that there are only a few camps allowed in each conservancy, all of which are required to remain below a certain size, creating an intimate experience. With fewer people – only guests staying in the conservancy are allowed in – you are able to enjoy bush walks, off-road and night drives. And you won’t have to worry about jostling for a spot as a maximum of five vehicles are allowed at each animal sighting. Being in the conservancy doesn’t mean less wildlife either – the gang’s all here, and you may just end up seeing more of them.

We love Speke’s Camp for it’s no-frills, down-to-earth feel and its address along the Olare Orok River. It’s not too far away for game drives in the main reserve and those bush walks we mentioned? Present and correct. Otherwise, Mara Plains Camp, one of National Geographic’s picks for the most unique lodges in the world, provides a taste of luxury along with specially-designed photographic vehicles.

A spectacular piece of the Masai Mara, the Triangle is bordered by the Serengeti, the Oloololo Escarpment and the iconic Mara River. The area is managed by a non-profit conservancy formed by members of the Maasai community and works to eradicate poaching, improve infrastructure, and power local conservation projects. The Triangle makes up a whopping third of the reserve, while promising fewer crowds (there are only a handful of camps inside the conservancy), incredible numbers of wildlife, and front-row seats to the river crossings. It was also featured in many scenes from Out of Africa, which is easily believed when you set eyes on the vast plains and soaring escarpments.

One of our favourite camps in the Triangle, Little Governor’s sits beside a peaceful waterhole where wildlife stops for a drink, not far from the famous Mara River Crossings. Atop the very hill where Meryl Streep gazed over the Masai Mara, Angama Mara provides breathtaking views, superbly-designed tents and a private guide for memorable game drives.

When to go on a Masai Mara safari

The truth is, it really depends on what you’d like to see. If it’s the rip-roaring scenes of the Great Migration, time your visit for July when the wildebeest begin to arrive in Kenya and cross the Mara River as crocodile feast on the slowest runners. These iconic River Crossings continue throughout the peak season (July to September), before the herds return to the Serengeti in October. Apart from epic game drives, this is also the best time for a bush walk due to short grasses and fewer water sources. With good reason, this is also the busiest time to go on a Masai Mara safari and it’s not uncommon to see hundreds of vehicles lining the river banks.

Any photographer will tell you that March to May are the best months to visit for spectacular photos. The rains invigorate the plains, the air is dust-free, and stunning thunderstorms create incredible images. It’s birthing season for many and the birdlife is in full plumage. This season is also the least expensive time to plan a Masai Mara safari. The wildlife sightings may be hard-won, but this makes them even more special. Temperatures hardly fluctuate between the dry and rainy seasons, and the rain usually arrives in short, sharp bursts in the afternoon. However, there is always the chance that roads, game tracks and airstrips might be affected.

For the best of both worlds, planning a Masai Mara safari between October and November means fewer crowds, lovely weather and fantastic Migration-watching. And calving season for topi, impala and giraffe!

It’s one of the most famous destinations in Africa and getting around on a Masai Mara safari is relatively simple. The easiest way to reach the Mara is by light aircraft, departing from Nairobi’s Wilson Airport (one-hour flight) and landing at the most convenient of the reserve’s nine airstrips. It’s possible to make the journey with a private guide and vehicle and then continue on to another of Kenya’s wildlife hotspots.

You’re unlikely to fly to Kenya to only see the Masai Mara and there are a myriad of destinations to combine with your Masai Mara safari. Firstly, it’s easy to reach the Serengeti; simply fly to Migori and transfer to Tanzania’s Tarime Airstrip for a flight to Seronera in the Serengeti. Whatever the time of year, with this duo, you’ll always catch the Great Migration in action!

Alternatively, add a few more of Kenya’s gems to your Masai Mara safari with our Highlights trip, and enjoy conservation projects in Laikipia and the sensational elephant of Amboseli, or throw in a dose of beachy goodness in Diani or the Seychelles. And if you can’t leave Africa without seeing those iconic gorillas, add a few days in Rwanda with our Gorillas and Game Parks trip.