A Mokoro Expedition Across the Okavango Delta - Timbuktu 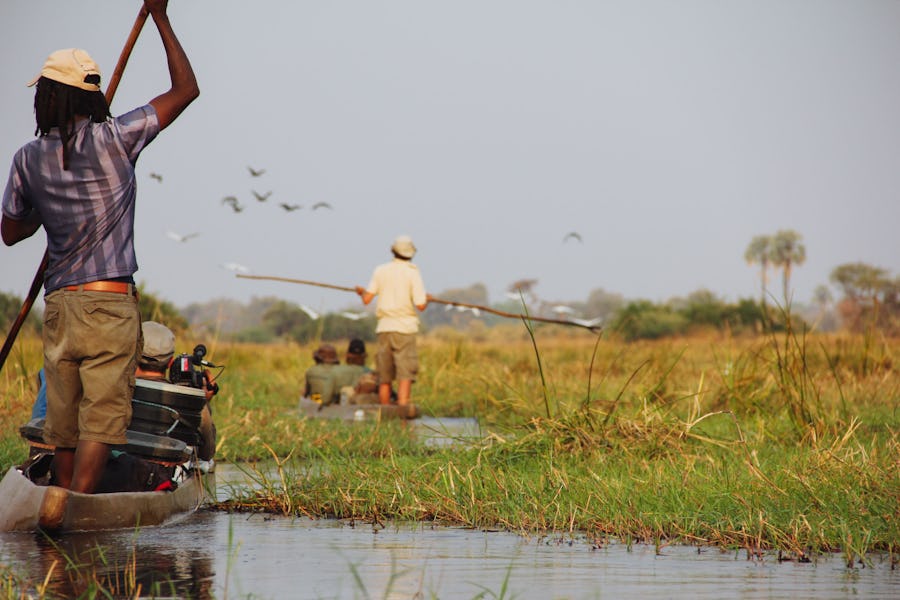 One of the reasons why these mokoros are such wonderful crafts is that they are quiet: you can float through the wilderness in total silence and become a part of the scene, instead of a loud and obnoxious interloper.

It’s for this reason that the ancient dugout canoes were our transport of choice on a three week scientific expedition across this magnificent wilderness. As part of a team of researchers and explorers, I was invited to join a census of the Okavango Delta, an epic transect that would cross the wetland from north to south and count all the birds we saw along the way.

What made this trip special is that it would be done using ancient crafts, mostly because they are silent and easy to navigate through the shallow waters. It was exciting to be able to experience this wilderness the way the first people of the Okavango did, and hopefully connect on a deeper level with the area. 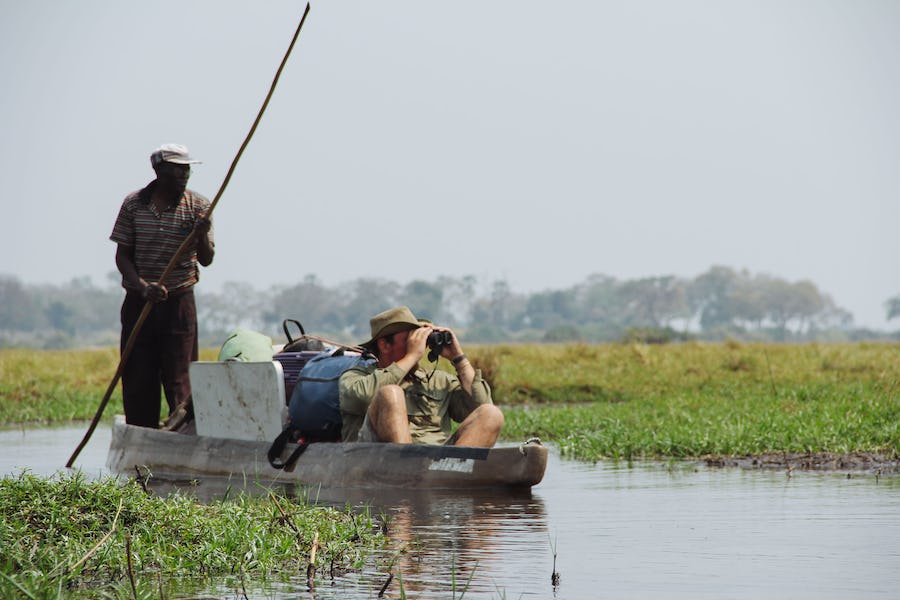 The expedition began at the northern panhandle of the Delta – at the spot where the Okavango River spills into the dry Kalahari sands in the shape of a massive geological fan. It was here where we loaded our mokoros with three weeks worth of equipment; food, clothes, cameras, satellite communication apparatus, and all the bits and pieces that would sustain us without assistance from the outside world.

The wonderful thing about the Okavango Delta, is that the difficulty in reaching it (usually only via light aircraft) makes it truly one of Africa’s last wild places, where humans are unable to dominate the wet and swampy terrain.

Our expedition began in the slightly more populated region of the Okavango, where the rivers’ steady flow took us past small villages and communities living off the Delta. Our mokoros moved swiftly along as we camped at the side of the river and settled into our new lifestyle. 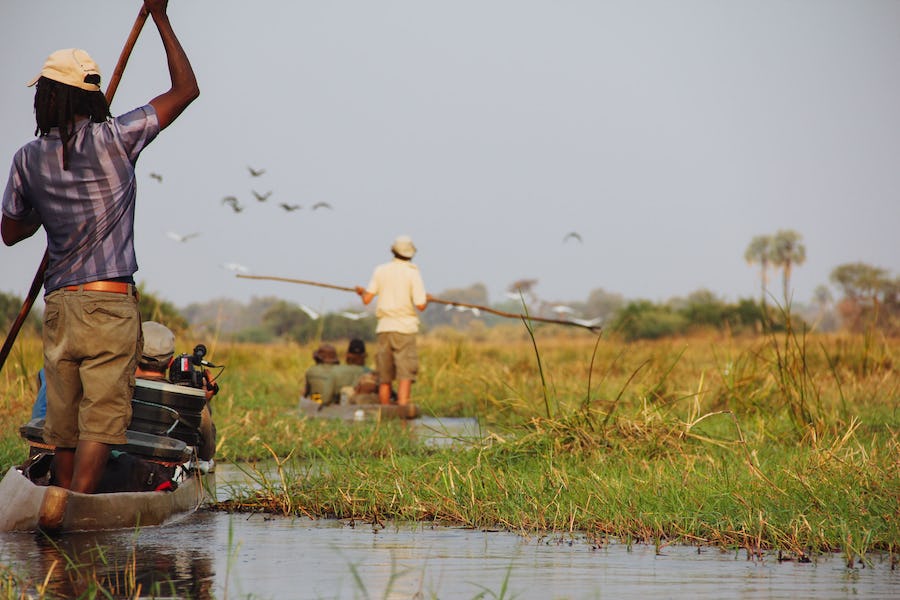 Each day we spent up to seven hours in the mokoros monitoring the local birdlife, a spotter boat always travelling ahead to log each of the species we saw. Fish eagles, cranes, kingfishers, plovers and storks greeted us as we floated along the delta and huge flocks of birds would rise in clouds as we drifted through their territory, deeper and deeper into the wilderness.

The further we travelled the thicker the floodplains and channels became and the smaller the islands, it really felt as though we were disappearing from the world, deep into another time.

It was at some point during the first week when we realised that we’d stopped seeing people altogether.

Camping on tiny islands in the north central delta was like being in a dream. Surrounded by kilometers of water on each side, we would fall asleep to the sounds of hippos grunting and lions roaring far in the distance. 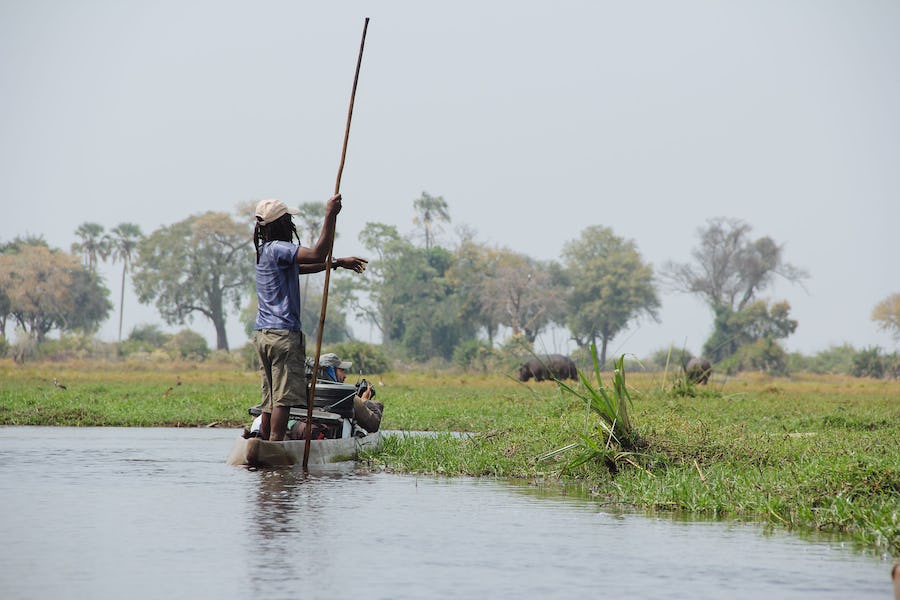 Deep in the wilderness

The day we reached Chief’s Island, the largest in the Delta, was one of the most spectacular days of our journey. Prior to reaching the island, we had run out of water below our mokoros, and had to drag them over mud and dry land for two full days. This was a taxing exercise, and knowing that wild animals were out there, hungry from the lack of water, made it all the more ‘interesting’.

The demanding journey only made reaching Chief’s Island sweeter, and as we got closer, the water freed up again and we floated beside this primordial landscape in awe and wonder. Thousand-year old baobabs loomed up in the distance and giant fig trees hung over the channel, filled with baboons, monkeys and birds.

One night, as I lay in my tent, beneath one of the massive baobab trees, it was as though I could feel time stretching back into the deep past and that this world was part of a much greater cosmic story that we haven’t quite grasped or understood.

That night, hyenas and lions came to visit our camp and in the morning tracks of elephants littered the ground. This was a land thick with wildlife, and we were new visitors.

Floating away from Chief’s Island in our mokoros, it was hard to accept that it might be a long time before we would ever experience a place like that again. But the bird census had to be completed, and we made our way through the shimmering floodplains and channels and continued to make our observations. 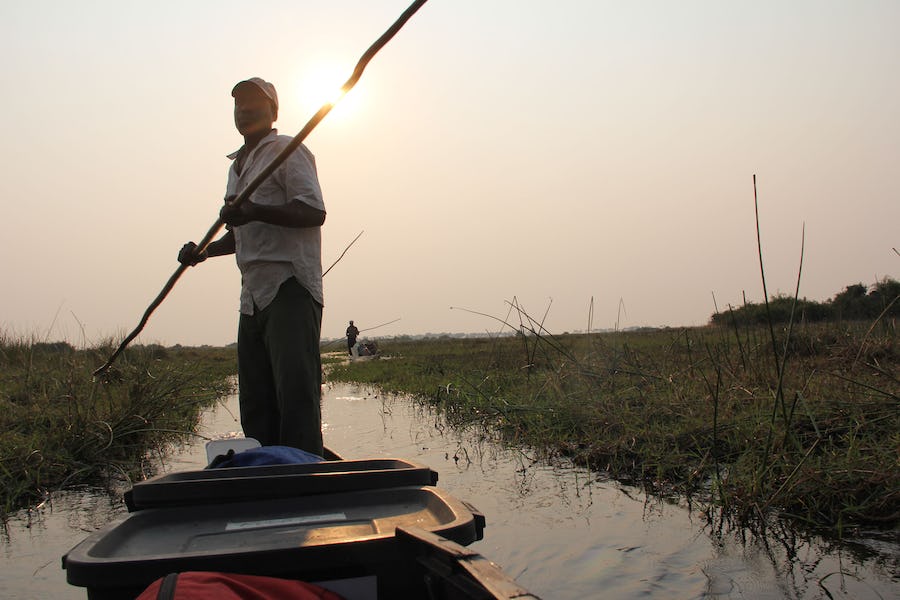 Reaching the main channel, known as the “Boro”, was met with both relief and a sense of sadness. Once again, we could see and hear the tourist boats as they rushed up and down the river. The villages began to appear again and there was a sense that modern reality existed in some other parallel universe, one that we were re-entering after a short holiday away.

But navigating the Delta had also held huge challenges, we were yet to have a shower in three weeks or eat normal food, so there were also things to look forward to in our return.

As we arrived back at our lodge in the far south of the Delta and jumped off our trusty mokoros that had transported us through this magical landscape, I decided then and there that there’s simply no better way to travel.