The story of Africa's last mountain gorillas - find them in Rwanda, Uganda & the DRC 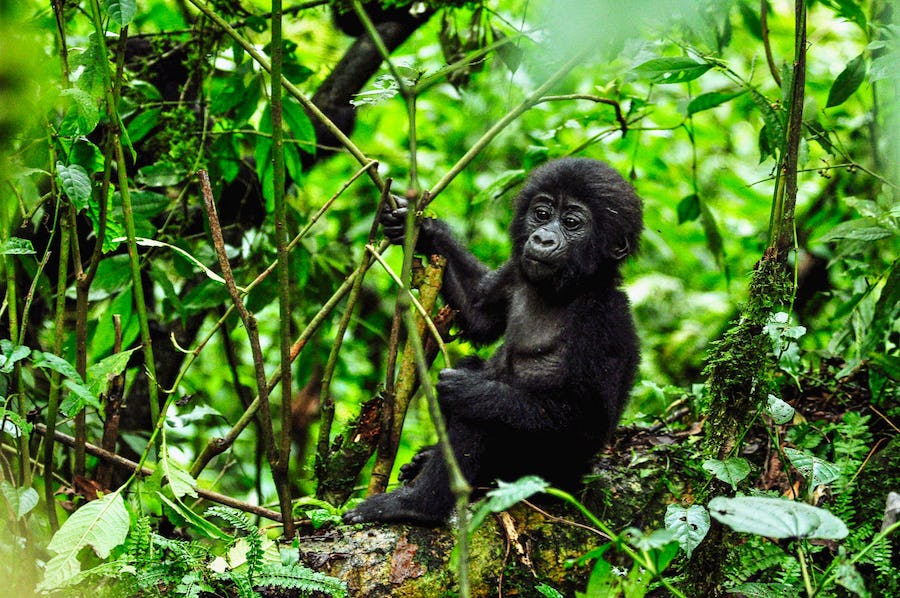 High up in the lush, mist shrouded mountains of East Africa, perched on the edge of the Great Rift Valley, are a collection of volcanic peaks known as the Virunga Mountains.

Up until the early 1900s, few people had ventured into these mysterious highlands straddling Rwanda, Uganda, and DRC, but explorers had heard rumours of a man-like creature living high up on the mountain slopes.

In 1902, a German explorer named Captain Robert von Beringe ventured into the rainforests, returning with stories of this elusive creature that few people could believe. As proof of his encounter, he brought back the skin of one of the mountain gorillas he had found.

It wasn’t until the parts had been analysed in Europe that the animal was proclaimed a new subspecies of gorilla and one that was much, much larger than any ape previously discovered. From then on, the Virunga mountains have held a powerful lure for people all around the world, and in 1950 the area became the first National Park to be proclaimed in Africa. The first concerted effort to understand the mountain gorillas was made in the 1960s, when the famous primatologist Dian Fossey began a two decade study of the gorillas. She spent every day with the gorillas, watching and documenting their close family bonds, and provided a window into the lives of these remarkable animals. She also confronted one of the greatest threats to the gorilla’s survival—poaching for their meat and parts—a battle that eventually led to her tragic murder.

After a century of habitat destruction, poaching and disease, today there are just 880 mountain gorillas remaining in the Virunga mountains, an ecosystem shared by the three countries.

Their survival relies on a close relationship between the forces of conservation, community and tourism. The money spent on permits to see the gorillas is put back into their protection, and in assisting the surrounding communities with education and upliftment. Saving the gorillas has become one of the most successful conservation models in African history, and has lead to a steady rise in gorilla numbers from an all time low of 620 individuals in 1989, to around 880 individuals today.

Rwanda, Uganda and DRC each have a share in the conservation success of these animals, and so if you are deciding where to travel to and who to support, its might be worth going to more than one location and experiencing the gorillas from multiple sides.

The Volcanoes National Park is just 50 kilometers from Kigali, Rwanda’s capital, and is home to more than half of the entire mountain gorilla population. This was Dian Fossey’s base, and it was here that she conducted most of her research into the unique creatures. Before trekking to see the gorillas, you can visit her grave (near the research centre) amongst the gorillas which became her life. Another large population of mountain gorillas reside in Uganda’s Bwindi Impenetrable Forest, named because of its tangle of thick trees and bamboo. This is one of the best-known and most established places to trek for the gorillas. The forest is also one of the most biologically diverse places in earth, with over 350 bird species and 200 kinds of butterflies, and has been recognised as a UNESCO World Heritage Site. Thanks to income from gorilla trekking, the mountain gorilla population has grown by a third in recent years. Aside from Uganda and Rwanda, the last remaining habitat of the mountain gorillas is in the highlands of Eastern DRC, in the Virunga National Park. Unfortunately, this area has been heavily affected by conflict and civil war in the last years, which has resulted in an all out war to keep the animals safe. However, the work of committed conservationists, shown in the striking documentary, Virunga, has ensured that the gorillas have held out, and there is now a movement to restore the park and the tourism opportunities. This has resulted in renewed interest in the area, as well as the incredible experience of trekking up to one of the only active volcanoes in the entire Virunga mountain range—Nyiragongo. Time to plan your visit

Since their discovery in 1902, the mountain gorillas of East Africa have been through a world of challenges, from habitat destruction, to poaching and even full scale war on their doorstep. And yet today, thanks to amazing conservationists, international support, and a thriving ecotourism industry, Africa’s last mountain gorillas are doing well.

If you speak to anyone who has looked into the eyes of a gorilla, they will tell you that it changed them in some way even if only to realise that this conscious, intelligent, remarkable animal was looking right back at them with the same curiosity.

Don’t waste time in planning a journey to see the gorillas, every time you trek into these misty mountain, you are helping to ensure the apes live on to touch people for generations to come.